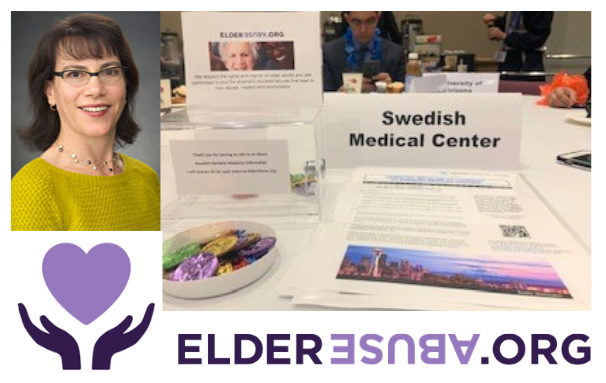 A big thank you to Carrie Rubenstein, MD, at Swedish Medical Center in Seattle, Washington, for fundraising for Elderabuse.org!

Carrie is a doctor that cares for patients of all ages but is particularly passionate about caring for older adults.  She is also the Director of the Geriatric Medicine Fellowship and Curriculum at Swedish, which means that she teaches and trains young doctors and residents in best practices in geriatric care.

When Carrie went to the American Geriatrics Society annual meeting this year she had a clever idea.  Carrie set up a booth to get people interested in her Geriatric Medicine Fellowship Program.  At the booth, Carrie placed a pile of tokens and two donation boxes, each dedicated to a nonprofit organization. Carrie selected Elderabuse.org for one of the donation boxes.

People stopping by Carrie’s booth had the option of selecting a token, representing a $5 donation, and placing it in the donation box of their choosing.  Through this creative fundraising idea, Carrie enticed many people to her booth – and raised money for Elderabuse.org and elder abuse prevention!

We are so appreciative of Carrie’s support for Elderabuse.org.  At Elderabuse.org, we direct charitable donations to the most effective and promising elder abuse programs throughout the United States.

Established in 2017, Elderabuse.org is the first and only national charity in the United States devoted to raising awareness of elder abuse in all forms, including financial abuse, and providing financial support for the very best in elder abuse research, direct services, policy and advocacy work and prevention taking place throughout the country.

The board of Elderabuse.org comprises national leaders in the field of elder abuse who have spent decades studying this issue, advocating for better policies nationally and internationally, while also developing direct services for victims and their loved ones.