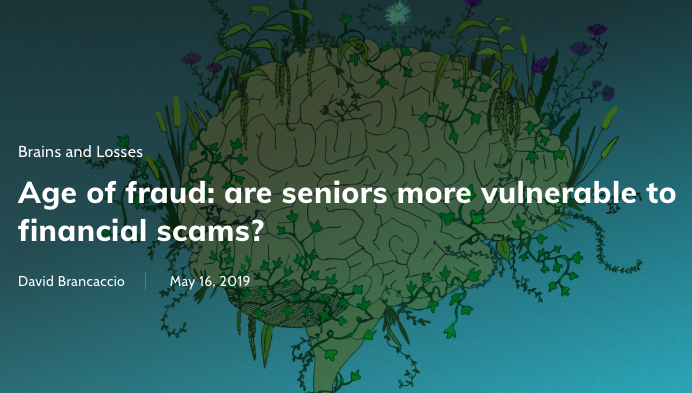 NEW YORK, NY (May 17, 2019) – Announced today, Marketplace will release a series of special reporting featuring Elderabuse.org spokesperson, Dr. Mark Lachs, about elderly financial vulnerability. Elder financial abuse has become a costly epidemic in the United States, yet for the most part, has remained in the shadows.

$6 billion was lost to elder financial abuse from 2013-2017. 1 in 5 seniors say they’ve been a victim of some sort of financial abuse.  Last year, 25,000 older adults reported being financially abused – but it is suspected that the number of unreported cases is much higher. The problem will only get worse as our population ages.

American Public Media’s “Marketplace Morning Report,” which has over 10 million weekly listeners, is shining a light on the epidemic of elder abuse. “Marketplace Morning Report” is a daily radio program that focuses on business, the economy and the events that influence them. Beginning Friday, May 17th, through Sunday, June 16, host and senior editor David Brancaccio will host series “Brains and Losses,” speaking with elderly scam victims from across the country. Elderabuse.org, the first and only national charity devoted to raising awareness of elder abuse in all forms, will be featured in this special reporting, with members of its Board of Directors being interviewed as experts in the field of elder abuse.

Marketplace’s series “Brains and Losses” will air Friday, May 17 through Friday, June 16th.  Please visit marketplace.org to listen to the series, and go to elderabuse.org for additional information about elder financial exploitation, elder abuse resources, and ways to get involved.

Established in 2017, Elderabuse.org is the first and only national charity in the United States devoted to raising awareness of elder abuse in all forms, including financial abuse, and providing financial support for the very best in elder abuse research, direct services, education, policy and advocacy and prevention taking place throughout the country.  Elderabuse.org is a fundraising and grantmaking entity, whose experts direct charitable donations made through Elderabuse.org to the most effective and promising elder abuse programs throughout the United States.

The board of Elderabuse.org comprises national leaders in the field of elder abuse who have spent decades studying this issue, advocating for better policies nationally and internationally, while also developing direct services for victims and their loved ones.